Highlights: Enhanced Tanpin Kanri is a specific example of Intelligence Augmentation. Store staff's local knowledge and engagement with their shoppers cannot be replaced; but Big Data & Analytics can provide a significant leg-up in their difficult job of hypothesis-generation by providing data-driven predictions that they can safely rely on and improve incrementally. In a highly competitive low-margin business such as fast moving consumer goods retail, pioneering use of IA in their operations will determine the winners.

Dr. PG Madhavan is the Founder and Chairman of Syzen Analytics, Inc. He developed his expertise in analytics as an EECS Professor, Computational Neuroscience researcher, Bell Labs MTS, Microsoft Architect and startup CEO. He has been involved in four startups with two as Founder. He has over 100 publications & platform presentations to Sales, Marketing, Product, Industry Standards and Research groups and 12 issued US patents. He conceived and leads the development of SYSTEMS Analytics and is continually engaged hands-on in the development of advanced Analytics algorithms.
More at www.linkedin.com/in/pgmad

Artificial Intelligence or “AI” is the technology of the future; it has been so for the past 50 years . . . and it continues to be today! Intelligence Augmentation or “IA” has been around for as long. IA as a paradigm for value creation by computers was demonstrated by Douglas Engelbart during his 1968 “Mother of all Demos” (and in his 1962 report, “Augmenting Human Intellect: A Conceptual Framework”). While Engelbart’s working demo had to do with the mouse, networking, hypertext, etc. (way before their day-to-day use), IA has increased in scope massively in the last 5 plus years. Now, Big Data & Analytics can truly augment human intelligence beyond anything Engelbart could have imagined.

IA is contrasted with Artificial Intelligence which in its early days was the realm of theorem proving, chess playing, expert systems and neural networks. AI has made large strides but its full scope is yet to be realized. IA on the other hand can be put to significant use and benefit today. Such is the story of Enhanced Tanpin Kanri in retail commerce.


As a keen observer of the retail ecosystem’s demand chain portion for the past 3 years or so, I am struck by the inefficiencies in large portions of Retail. Shoppers finding what they want on the shelf is considered a BIG problem in the industry (the so called “OOS problem” or Out-Of-Stock problem) – to the tune of $170 Billion per year! The following diagram illustrates the portion of Retail ecosystem on which we will focus in this blog.

The left half represents the current dominant model. “Push” model drives manufacturer’s FMCG (fast moving consumer good from “brands” such as Procter & Gamble, Kraft, Unilever and others) into the supply chain with store shelves as the final destination. As retailers move to the right half of the picture, they tend to be more agile and mature in their practices and are seeking a competitive edge through differentiation – they find that by focusing their store operations to satisfy the LOCAL customer via making available what she prefers on the store shelves, they can win. The poster-child of this revolution is 7-Eleven, the ubiquitous store at virtually every street corner around the globe!

7-Eleven’s use of the “Pull” model since early 2000’s has been very successful as captured in a case study at Harvard Business School in 2011 (HBS Case Study: 9-506-002 REV: FEBRUARY 23, 2011). Quoting from this study, “Toshifumi Suzuki, Chairman and CEO of Seven and I Holdings Co., was widely credited as the mastermind behind Seven-Eleven Japan’s rise” and goes on to say that ‘Suzuki’s emphasis on fresh merchandise, innovative inventory management techniques, and numerous technological improvements guided Seven-Eleven Japan’s rapid growth. At the core of these lay Tanpin Kanri, Suzuki’s signature management framework’.

Proof is in the pudding – “Tanpin Kanri has yielded merchandising decisions that has decreased inventory levels, while increasing margins and daily store sales” since the 2000’s, the HBS case study points out. So what exactly is Tanpin Kanri?

Tanpin Kanri or "management by single product," is an approach to merchandising pioneered by 7-Eleven in Japan that considers demand on a store-by-store and product-by-product basis. Essentially, it empowers store-level retail clerks to tweak suggested assortments and order quantities based on their own educated hypotheses . . .

You can tell that Tanpin Kanri lies well to the right in the Retail Ecosystem diagram above. To call out some features:
·       PULL model
·       For a buyers’ market
·       Focus on How to satisfy customer
·       Item planning and supply driven by retailer and customer
·       Symbolic of Consumer Initiative

I believe that it is simply a matter of time before Tanpin Kanri variants dominate the Retail demand chain model. As shoppers clamor even more for their preferences to be made available, Retailers will evolve incrementally.

So, where does the PULL Model provide most bang for the buck today? 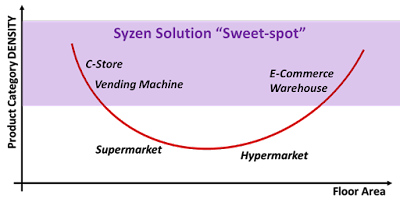 Where ever Product Density (number of products to be stocked per unit area) is high, “customer pull” will help prioritize what products to stock. Today’s Tanpin Kanri at 7-Eleven Japan accomplishes “customer pull” incorporation via super-diligent store staff manually making the choices.

Here are the “hypothesis testing” steps that 7-Eleven store staff goes through in operationalizing Tanpin Kanri. Based on frequent interactions and personal relationships with the shoppers at a store, the staff generates hypotheses of the shoppers’ needs, wants and dislikes. Based on such information, store staff formulates hypotheses of what to carry (or not) on their store shelves (“merchandising”). Sales during the following days and weeks allow them to ascertain if their hypotheses should be rejected or not; this continuous iteration goes on over time to “track” shopper preferences. Clearly, Tanpin Kanri methodology has been highly successful for 7-Eleven according to HBS case study.

IA based on Big Data & Analytics can play a major role in Tanpin Kanri. In any scientific methodology, coming up with meaningful hypotheses is the HARD part! In Tanpin Kanri case, it is the personal relationships, diligence and intelligence of the store staff that help generate the hypotheses. This is the super-important human value-add that no AI can fully replace! However, we can AUGMENT the hypothesis-driven Tanpin Kanri with Data-Driven precursor that enhances staff intelligence by providing them with predictions that they can build on to formulate their hypotheses.

IA happens in the data-driven precursor step. 7-Eleven has vast amounts of transaction and customer data in their data warehouse. They can be “data-mined” to find shopper preferences at a particular store which can form the basis of what to carry and how much on the store shelf. The data-driven predictions then become the “foundation” on which the store staff adds their own “deltas” based on the shopper quirks that they have surmised through their all-important personal relationships.

Syzen Analytics, Inc. has accomplished IA integration using Machine Learning and a new development in Analytics called “SystemsAnalytics”. A dumb “prediction” for SKU shares is same sales as last year (see the multi-colored bar chart in the middle of the picture below) – in other words, historical sales is the “information-neutral” prediction. But surely, we can do better than that with Systems Analytics.

Syzen is able to provide SKU-by-SKU, store-by-store and week-by-week predictions using typical T-Log data that every Retailer has in its data archives. A typical prediction of Syzen’s ROG-0 SaaS product for a typical SKU at a particular store looks like this. 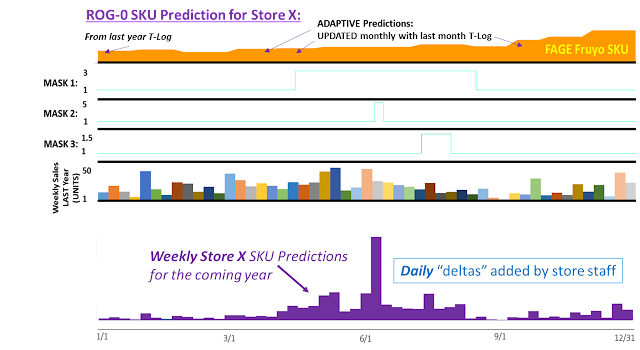 ·       The purple uneven “picket fence” is the weekly predictions – lowest bar chart. This is obtained by combining different “masks”.
·       The papaya-colored mask is the new and most significant one. The values are predicted based on appropriate past intervals of T-Log data digested via Systems Analytics and updated adaptively.
·       The numbered masks in the middle accounts for things that the store manager knows that will happen next year such as a local festival or a rock concert in the nearby park.
·       The MANUAL part of Tanpin Kanri now only involves the store staff simply making daily small adjustments to the SKU “facings” based on local shopper “gossip” to the purple bar chart!

Convenience stores are drawn to the Enhanced Tanpin Kanri method because of the maturity of operations they already possess. With more agile supply chains and the desire to differentiate their stores in response to their local clientele, Syzen finds a lot of enthusiasm among “high-density” Retailers for our predictive solution that makes Tanpin Kanri more scalable due to lesser dependency on super-diligent store staff. Advances in Systems Analytics and other quantitative methods will refine products such as Syzen’s ROG-0 SaaS in the future to sharpen shopper-preference based product assortment predictions.

Enhanced Tanpin Kanri is a specific example of Intelligence Augmentation. Store staff's knowledge of local happenings and engagement with their store shoppers cannot be replaced; but Big Data & Analytics can provide a significant leg-up in their difficult job of hypothesis-generation by providing data-driven predictions that they can safely rely on and improve incrementally. In a highly competitive low-margin business such as fast moving consumer goods retail, pioneering use of IA in their operations will determine the winners.