Dr. PG Madhavan developed his expertise in Data Analytics as an EECS Professor, Computational Neuroscience researcher, Bell Labs MTS, Microsoft Architect and startup CEO. Overall, he has extensive experience of 20+ years in leadership roles at major corporations such as Microsoft, Lucent, AT&T and Rockwell and startups, Zaplah Corp (Founder and CEO), Global Logic, Solavei and SymphonyEYC He is continually engaged hands-on in the development of advanced Analytics algorithms and all aspects of innovation (12 issued US patents with deep interest in adaptive systems and social networks). More at www.linkedin.com/in/pgmad

This blog is a coming together of a bunch of my past blogs and my reading of a recent book by John Casti called “X-Events”.

PG Blog: “What does ‘Emergent Properties in Network Dynamics’ have to do with Shopping?”; http://pgmadblog.blogspot.com/2012/10/what-does-emergent-properties-in.html?m=1
PG Blog: “Network Dynamics & Coupling: Shannon’s Reverie Reprised . . . “ http://pgmadblog.blogspot.com/2012/11/network-dynamics-coupling-shannons.html?m=1
Book by John Casti, "X-Events: The Collapse of Everything";
http://www.amazon.com/X-Events-Collapse-Everything-John-Casti/dp/B00BJEP6B4

Reading X-Events book triggered ideas from some of my past academic work (http://www.jininnovation.com/SoF.PDF) combined with my present startup, “Syzen Analytics” (http://www.SyzenAnalytics.com/), leads me to suggest an interesting way to create “pocket” X-events in Retail Commerce via X-Event Marketing or “XM”!

Let us start at the beginning . . .
1.     Shannon understood the importance of rare events in conveying information. He sought a mathematical formulation to capture this important property of our brains and came up with the definition of “entropy”. As I had made clear in the original blog, this is a fictitious reverie I made up to give one the guts to turn other valuable physical/ practical insights into mathematical forms!

2.     Similarly, from my past research in Neuroscience, I had some strong impressions that have refused to go away despite the passage of decades. One is the activity that precedes the most significant X-Event in each of our lives, Death! Unreplicated and unpublished observations in our neurophysiology labs had shown that one of the surprising events that happen before a mouse with brain in-dwelling electrodes dies is the all-out firing of “complex spike cells” (which when the mouse is alive and performing “place cell” tasks are painfully difficult find and record). In other words, the “natural state” of the brain seems to be excitatory and the work of a healthy brain seems to be to assert control and coordination by keeping the *inhibitory tone* high so that all hell does not break loose (by cells firing away with no coordination or control). I speculate a regime-transition of the sort shown below in death: the right-most picture is indicative of brain cells firing away in an uncontrolled fashion (just before a major “X-Event”, death or epileptic seizure) with the left-most indicative of a properly functioning brain (“nicely” coupled). The next story will illuminate the idea of the middle picture where the “system is uncoupled” with the system poised for all its energy to pile into a single “mode” and create a major suppression of inhibition in the brain.

3.     Following “Shannon’s approach”, how do I make these intuitions mathematical? Let us look at the right-most picture. As I outlined in my “Shannon’s Reverie Reprised” blog, everything is firing away and the potential field will show up equally across the scalp, much like a single “wavefront” that reaches all the regions of the scalp simultaneously. Imagine you are at a beach looking out to the sea and gentle waves are rolling in – let us say in parallel to the beach. If you are standing knee-deep in the water and look in a direction parallel to the beachfront (i.e., up or down the beach), the spatial frequency in your “look direction” (or the frequency of “corrugation”) is 0 cycles/meter! Much like the ocean waves, the single wavefront of activity is nearly “constant” across the distributed neocortex and its relevant strength can be thought of as the power at zero frequency. I happen to know that power at zero frequency is called “Scale of Fluctuation” or “θ” in random field theory. From the previous work of Eric Vanmarcke (“Random Fields”, 1983, with an updated edition in 2010), θ is defined below. I refer you to my blog and academic paper mentioned at the outset for the gory details!

Is Theta as powerful and useful as Shannon’s entropy . . . time will tell. As you see in my academic publication, Theta does have some intriguing properties in the case of 2nd order linear time-invariant systems which may indeed prove useful in the future! Adding results from my simulation and data analysis of machine tool chatter, my summary observation is that:

Large value of Theta can be good or bad. It indicates “Coupling”: *good* coupling as a nicely functioning brain (or lathe) or a *bad* coupling as in death (or chatter)! The key here is that low value of theta can be a “predictor” of impending X-Event!

As you can imagine, if our speculation above holds up, we may be able to predict X-Events (or Taleb’s “black swans”) such as 2008 Great Recession or Tohoku earthquake and eventual tsunami. In the case of Tohoku, a few extra hours of warning may have helped Fukushima engineers reach a consensus and move the power generators to a higher location (thus avoiding the nuclear disaster).

XM:
In this blog on X-Event Marketing (“XM”), my purpose is different. I want to *create* desirable, “pocket” X-Events to beneficial ends!

One of the preconditions of “interesting” dynamics in systems is sufficient “complexity”. This can be taken to mean multiple actors with high degrees-of-freedom, dense interconnections with linear and non-linear coupling and in general, hard to analyze! One such natural system is the “shopper network”.
A modern-day shopper is enmeshed in an ever-varying network of preferences and influences (from friends and family) and embedded in a network distributed in time and space – just the type of complex systems where “interesting” dynamics can arise. We want to create desirable “pocket” X-Events in the shopper network with the purpose of increasing business value for the shopper or the seller or both. 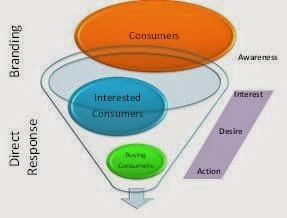 This is the so-called “Purchase Funnel” that an individual shopper goes through when executing a product transaction. The marketing, merchandizing and offer activities are devised to impact the shopper at predetermined points of importance in the shopper’s decision making process. For example, a well-conceived offer delivered via shopper’s mobile phone at the point of “Desire” may precipitate a Purchase “Action” – a win for the seller (in this case both the retailer and the manufacturer of that product; for example, Walmart and Procter & Gamble, respectively).

This was one shopper. Now, you have to consider the shopper being embedded in a network. At this point, it may be useful for you to review my earlier blog, “Social Network Theory” http://pgmadblog.blogspot.com/2013/08/social-network-theory.html, where Barabasi’s work in Network Graphs and the following terms are discussed:
1. Clusters (of friends who “hang out”).
2. Weak links (to your long-forgotten high school classmates).
3. Hubs (politicians and others with massive number of contacts).

Clusters and hubs are some examples of the influence on an individual shopper. There are many such shoppers, all interconnected, when studying the dynamics with a view to creating a “pocket” X-Event. Even this does not complete the complexity picture – the shoppers are distributed in space (you are in NYC and your buddy from Seattle tweets about a cool product that he bought) and time (good and bad product reviews reaches you at various times and not in a synchronized fashion). 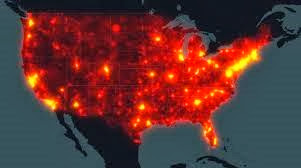 That the Shopper Network is sufficiently complex to engender “interesting” dynamics must be beyond a doubt by now! The picture above may be a reasonable representation of the Shopper Network (WITHOUT the time element captured – we will need a video showing the undulations in the ”heat map”). The “heat” shown as ‘yellow’ spots indicate the total dollars spent each day on a particular product on a particular day, aggregated to a county for all of USA. Clearly, this will vary from day-to-day.

This is the essential question of XM. Of course, there are other important questions such as the type and timing of manipulations (Offers to selected customers? A country-wide branding effort? Is it a new product or an existing one? And so on). As a systems engineer, I will find a partner who is more qualified than I am in answering the marketing questions; I will focus on Systems Analytics tools to create a quantitative execution infrastructure to deploy marketeers’ ingenuity!

Engineers love scalars! I suspect it is because having a single control variable is easier to manage than many. Probability theory is replete with reduction to scalars – I am talking about mean, variance, correlation coefficient, Entropy, Theta, . . . The full underlying information is available in the joint probability density functions but they are a bear to handle! So, we reduce it to a scalar – clearly, in the process, we have thrown away MUCH information but what is left is what we plan to use; so our justification for selecting and using a scalar for a particular engineering task is very *operational*.

We will use the scalar, Theta, to answer Shopper Network analysis and control question I asked a few paragraphs earlier.

Scenario: New Product Introduction
Procter & Gamble is going to introduce a new detergent and wants to create a ground-swell of purchase interest (our “pocket” X-Event). 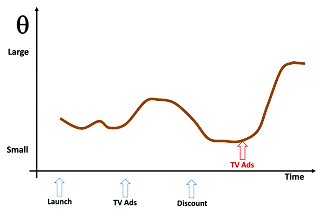 NOTE that in this fictitious example, P&G would have pretty much done the various marketing campaigns that I speculate here on their own. The KEY point is that P&G does NOT have a scalar (or any) measure to get immediate feedback regarding their efforts, combined for the whole country. The ability to quantify “closed-loop” intervention is the value of our humble scalar, Theta, in X-Event Marketing!

Clearly, what manipulations are best applied to the network and when is an open question. Utilizing Theta, Sysan is developing methods using “massive simulation methods” (for background, please see: John Casti, “Would-Be Worlds: How Simulation is Changing the Frontiers of Science”) that can predict the effect of various interactions at various instances of time and points in space, thus providing guidance for the most effective use of vast sums of money required for ad campaigns and discount offers.

Stay tuned for our initial results . . .